Scrub with a brush. 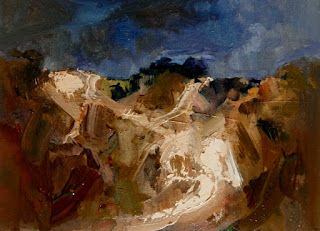 A brush with the weather is the subject for this study.
Plenty of texture in the sky and sand gets brushed down the bank.

Abstraction is fun.  This imaginary scene gets its reference from memories of
the dune and sandbanks along the East coast of Lincolnshire.

Many dunes have been swept away in storms and floods over the years.  Where I played as a child in Sandilands the high dunes between this little village and the town of Sutton-on-Sea were dramatically removed by the high tides in 1953.  I was 10 years old but my happy memories of the dunes linger still.

The photograph below shows the 'Acre Gap at Sandilands' where massive waves came over the sand dunes and houses along the little cinder track to Sutton-on-Sea in 1953. 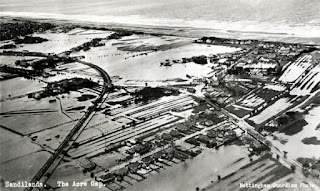 After the 1953 floods a curved concrete barrier was built along the edge of the promenade at Sandilands with steps down to the beach.  For many years the high barrier protected the little beach huts which were re-built after the big storm.   However, during the storms of 2013, wind lifted sand up the beach in drifts, filling the curved barrier and covering the promenade.  Diggers were used to move tons of sand. 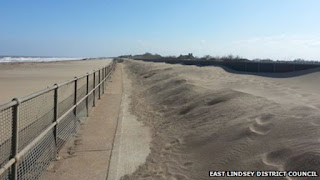 Sand drifts on the promenade 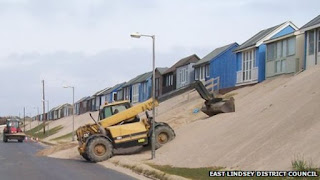 Sand blown through the gaps in the line of beach chalets.

Anne Wood
Art and my wild garden are my favourite things. My studio is a timber cabin in rural Lincolnshire surrounded by fields. Early blog posts are about my oil paintings referenced to landscape. I returned to making abstract work in 2018.

Links to my online galleries